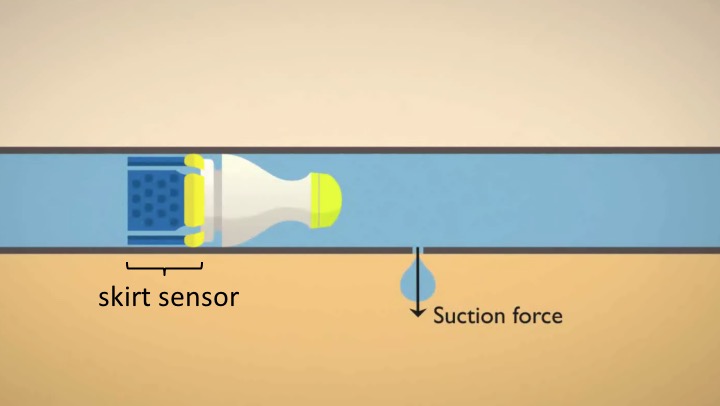 Pipeguard Robotics is a MIT startup and our goal is to make water distribution systems safer and more efficient.

Our robot, named Daisy, is a soft body, tetherless robot for finding leaks early and accurately in municipal water distribution pipes. It can be put into pipes from any T junctions or hydrants, and inspect the pipes without shutting down water services.

Our cloud based analytics platform can create a google map of leaks, informing the pipe operator the location and size of the leaks and providing repair recommendations.

There are 6 issued patents and 4 pending patents on our technology.

What is the limitation of this technology?
Our robots can only detect leaks in pressurized pipes with a flow. The minimum pressure requirement was validated at 0.8 Bar (or 10 psi), and the minimum flow speed is 0.1 m/s (0.3 ft/s).

Can it find leaks in sewage pipes?
As long as the sewage pipes are pressurized above 0.8 Bar and has a flow inside, yes.

Can the robot get stuck in pipes?
The robot is soft and squeezable to avoid getting stuck in the pipe. It can bend in order to enter the pipes through T junctions, and go around pipe elbows, very sharp ones. It adapts to up to 20% pipe diameter changes due to dirt in the pipe or pipe deformation, so it is very hard to get the robot stuck in the pipe. In most cases, even if it was stuck, it would be momentary; the water pressure would push it through the pipe. The only cases where it could get stuck is butterfly valves and pipes with significantly blockage.